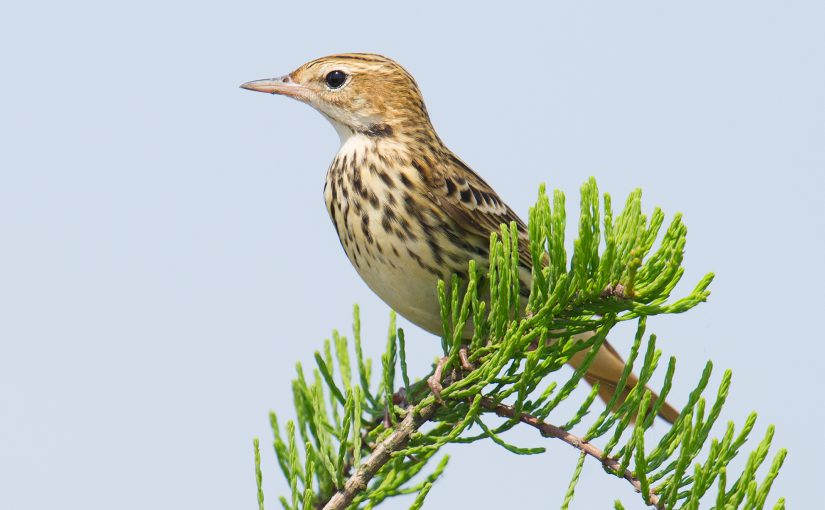 On Saturday near Microforest 2 at Nanhui, Michael enjoyed his first views of Pechora Pipit in 26 years while Elaine and I enjoyed our second view in a week of this scarce passage migrant. Those views were just a prelude to the excitement of Sunday. Again at Nanhui, driving along the sea-wall road, we began finding Pechoras. Some of them were singing; two of them were sparring. We decided to make a survey of this scarce passage migrant. Driving slowly from the Holiday Inn north, we scanned the thickly vegetated inner base of the sea wall. Thousands of trees have been planted there recently, giving the Pechoras perches and making them easier to see. We counted 26. Here is the song I recorded:

Saturday began with a 4 a.m. pickup of Michael and 90-minute drive to Lesser Yangshan. We went first to Accidental Marsh (30.611902, 122.114873). Accidental Marsh is several hectares of newly formed wetland created by the construction of a causeway linking Lesser Yangshan and Dazhitou Island. Besides the waders noted above, we found singing Oriental Reed Warbler, and we rejoiced because for a change we had found a place where the reed-bed habitat of that species is expanding, rather than contracting, as is so often the case on the beleaguered Chinese coast. Another interesting record there was Black-collared Starling, uncommon in the Shanghai region. Moving to Garbage Dump Gully (30.644194, 122.058660), we found Black Drongo and singing from cover the Rufous-tailed Robin. On the half-destroyed Garbage Dump Coastal Plain next to the Gully, we met a lone Pacific Golden Plover.

We drove back to the mainland and remained at Nanhui the rest of Saturday and all of Sunday. We noticed once again that the Magic Parking Lot (30.884992, 121.968317) and nearby areas are turning into a circus, especially on holiday weekends. Upwards of 300 cars are parked there at midday, and though the Parking Lot is an effective migrant trap, on weekends in good weather birding the Lot is difficult after 9 a.m.

In light of the new popularity of the Lot as well as the continued flattening of the local reed beds, we are looking for new areas to bird. We found a place we are calling South Lock (30.860244, 121.909999). South Lock is the area around the place where the S2 expressway meets the mainland. A sluice gate is nearby, hence the name. On Saturday, trees at South Lock were holding Eastern Crowned Warbler, a species beloved by Michael, and the adjacent ponds and marshes held waders and buntings and gave us our only weekend record of Grey Wagtail. A stop there on Sunday morning gave us our Dusky Warbler. South Lock looks good and because so near the freeway may remain undeveloped. Another new area for us is South Lawn (midpoint at 30.853905, 121.897363), a stretch of grassy land at the inner base of the sea wall north of Luchao (Lúcháo Gǎng [芦潮港]). There we found flocks of Eastern Yellow Wagtail containing members of the nominate race as well as taivana.

All four of our views of Siberian Blue Robin occurred in the microforests of Cape Nanhui. In Shanghai, Sibe Blue offers a good example of how migrant traps work. This species will spend the summer in thick cover in the great forests of northeast China, the Russian Far East, Sakhalin Island, and Japan. It is a master skulker. Flying up the Nanhui coast, with its dearth of forest cover, a Sibe Blue sees the microforests the same way a tired traveler sees a hotel after a long day on the road. In the Nanhui microforests, now thickly carpeted with daisies and grasses, watch your step! Tired migrants such as Asian Stubtail, Siberian Blue Robin, Rufous-tailed Robin, and Pale Thrush will wait until your foot is inches away before exploding out.

May Day is arguably the height of migration season in Shanghai. On warm, sunny days such as Sunday, the stimulation is constant, and exciting moments are many. Here is just one of many anecdotes: Nanhui, Sunday morning. Through Michael’s spotting scope I am enjoying a view of an endangered Yellow-breasted Bunting that he and Elaine found. As I watch, a Pechora Pipit jumps into the circular view and drives the bunting away. An endangered bunting being chased away by a scarce passage migrant! Wow! Then Michael calls out that he has just seen a “raptor.” The bird disappears, and we get into our rented Buick and drive toward the trees into which it vanished. As we drive, out jumps our “raptor”: Large Hawk-Cuckoo! Three rare Shanghai records in the space of five minutes!

The view of Yellow Bunting was team birding at its best. We were driving slowly on the semi-abandoned low road discovered a few months back by Michael. (The starting point of this road, which leads inland from a point behind the Magic Parking Lot, is 30.885592, 121.967369.) As we drove, we were kicking up foraging buntings, mainly Black-faced Bunting. Elaine and I, sitting up front, were the first to notice an anomaly: a yellow-shaded bunting with a mustache and goatee. It had to be Yellow Bunting! The bird disappeared. Michael and Elaine were going for a lifer, so we had to work carefully. We stopped the car and walked up and down the road, six eyeballs searching for the rare migrant. Elaine found it! Michael and I came running. Luckily for us, the bunting had found an area it liked. Michael was ecstatic as he set up his spotting scope and watched the bunting feed.

On Thurs. 28 April, Elaine and I did a quick walk-through at Shanghai’s Zhongshan Park. The park is more than a hundred years old, has many tall trees, and offers some of the best mid-sized urban-park birding in Earth’s largest city. Zhongshan Park holds sentimental value for me because it is where I ticked Elaine as a lifer (I met her there).

At Zhongshan Park, the focal point is the little central pond (31.224111, 121.414194). On Thursday all 3 Narcissus Flycatcher were noted there, among them a female, as well as our Eastern Crowned Warbler and Sakhalin/Pale-legged Leaf Warbler. A tiny island in the center of the pond is almost cat-free (some cats do make the jump) and contains several large trees. Thanks to the nearly daily presence there of bird photographer Wāng Jìn Róng (汪进荣), the central pond is an information clearinghouse; Mr. Wang and his buddies are always eager to tell you what they have been seeing lately.