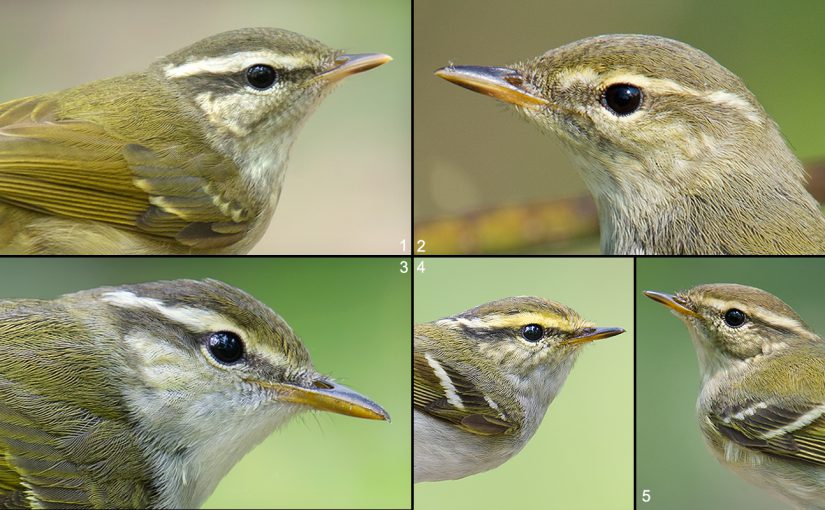 Recently at Cape Nanhui, the birding hotspot in Pudong, my object of observation was Pale-legged Leaf Warbler, one of the Big 5 Leaf Warblers in Shanghai. In both spring and autumn, Phylloscopus tenellipes passes through Earth’s Greatest City in considerable numbers. A lookalike species, Sakhalin Leaf Warbler P. borealoides, also passes through Shanghai.

In this post, I shall outline the difficulty of distinguishing Pale-legged Leaf Warbler from Sakhalin Leaf Warbler on anything but call and song, and I will show you some of the traits of “Pale–Sak” that set this species pair apart from other leaf warblers.

Pale-legged Leaf Warbler is safely separable from Sakhalin Leaf Warbler only by song and call. Every other trait of each can occur in the other. Numerous authorities confirm this. Swedish ornithologist Per Alström calls the two species “almost identical” and “virtually indistinguishable except by song” (Alström 2012). Mark Brazil says field separation of Pale–Sak is “uncertain,” and he warns readers to “beware light conditions” (2009). Clement writes that Pale-legged and Sakhalin are “very similar” and claims, dubiously, that the latter is distinguishable from the former “mainly by greener upperparts and lack of wingbars” (2006). Clement goes on to describe juvenile Pale-legged as being “more greenish on upperparts,” which begs the question of whether the greenish Pale–Sak one is observing is an adult Sakhalin or a juvenile Pale-legged. Moreover, a quick look at Oriental Bird Images shows many Sakhalin Leaf Warbler with wing bars.

Thankfully for us birders, the songs of the two species are distinctive and provide the basis for a safe ID. The song of Pale-legged, occasionally heard in Shanghai in May, is a cricket-like trill, that of Sakhalin a high-pitched, three-note whistle.

One day in May, I heard Pale-legged and Sakhalin singing together in Zhongshan Park—proof that Sakhalin passes through Shanghai. Usually, however, birders here are forced to perform the less than satisfying task of assigning the individuals they see to the category “Pale-legged/Sakhalin Leaf Warbler.”

Bottom line: In Shanghai, any Pale–Sak one sees is probably Pale-legged Leaf Warbler, the continental breeder, and not Sakhalin Leaf Warbler, the breeder from the eponymous Russian island plus Hokkaido and Honshu; but to claim certainty about any non-singing individual is the taxonomical version of Russian roulette.

DISTINGUISHING PALE–SAK FROM OTHER LEAF WARBLERS

Here are a few principles:

• Pale-legged Leaf Warbler and Sakhalin Leaf Warbler are plain, mid-sized to large leaf warblers without even the hint of a coronal stripe.

• Pale-legged/Sakhalin Leaf Warbler has distinctive pink legs and a short bill with a black smudge on the lower mandible, which is pink at the base and tip.

Even on a fast-moving Pale–Sak in poor light, the pink of the bill and especially of the legs is readily seen. The distinctive pale color of these bare parts is a handy tool for distinguishing Pale–Sak from birds in the Arctic Warbler Complex, which like Pale–Sak lack a crown stripe and usually show one or two wing bars. (The Arctic Warbler Complex consists of Arctic Warbler Phylloscopus borealis, Kamchatka Leaf Warbler P. examinandus, and Japanese Leaf Warbler P. xanthodryas. In Shanghai, Arctic Warbler is the most common of the three, migrating through Shanghai every spring and autumn.) The pink coloration also distinguishes Pale–Sak from Dusky Warbler P. fuscatus, an uncommon migrant and winter visitor in Shanghai, and the scarce passage migrant Two-barred Warbler P. plumbeitarsus.

The tail-pumping of Pale-legged/Sakhalin is one of the most distinctive behavioral traits of the species pair. The steady movement usually occurs independently of other muscular actions and is slow enough for the eye to see. The tail-flicking of Arctic Warbler, by contrast, is more spasmodic and is often accompanied by wing-flicking.

• Pale-legged/Sakhalin Leaf Warbler is often found on the lower, thicker branches of trees.

With its ability to forage along thick branches and not just glean from the underside of leaves, Pale-legged/Sakhalin can remind one of a nuthatch. Other species such as Arctic Warbler use the lower branches, but sustained observation shows Pale–Sak more often in those areas. Note: In May and June 2016, I studied Pale-legged Leaf Warbler on its breeding grounds in Heilongjiang. There, amid trees older and taller than one usually sees in Shanghai, I most often noted the species far above my head, in the mid-canopy.

A NOTE ON CALLS

Except for the mainly silent migrant Eastern Crowned Warbler, Shanghai’s Big 5 Leaf Warblers all call in both spring and autumn. The calls are distinctive. The metallic tink of Pale–Sak contrasts markedly with the tzit of Arctic Warbler, the dweet of Pallas’s Leaf Warbler, and the sweet of Yellow-browed Warbler.

Editor’s note: This post caught the attention of Philip D. Round, a professor at Mahidol University in Bangkok and an expert on leaf warblers. In an e-mail to me, Round writes that as discoveries are made and papers published, separating Pale-legged Leaf Warbler from Sakhalin Leaf Warbler on call may become more widespread. Separation on morphology, by contrast, will be much more difficult, though it may eventually turn out to be possible in the hand.

The following paragraphs are from Round’s e-mail to me:

“I enclose a paper that details the first records of both Kamchatka Leaf Warbler and Sakhalin Leaf Warbler from Thailand. [Editor’s note: the paper, “Addition of Kamchatka Leaf Warbler Phylloscopus examinandus and Sakhalin Leaf Warbler P. borealoides to Thailand’s Avifauna,” is available for download through shanghaibirding.com (708 KB).] This has been rather overtaken by events, as we have now caught into the hundreds of Sakhalin LW, mostly on spring passage, and quite a few more Kamchatka. I have an undergraduate student who has carried out DNA assay on about ten percent of all the Pale-legged and Sakhalin LW caught. For many of these we have also recorded call notes on release. When she comes back from overseas study in January 2017 I hope we’ll get a paper out which publishes details of call-note frequency and DNA results for this large sample, which should show the correlation between species and call-note frequency clearly. (Actually this is moderately and anecdotally well-known already. I think either Frank Lambert or Jonathan Martinez was the first to draw my attention to the difference, and it is mentioned by Yap et al. in BirdingASIA with reference to an overwintering Singapore bird.) [Note: Round is referring to Yap, Francis et al., “First wintering record of the Sakhalin Leaf Warbler Phylloscopus borealoides in South-East Asia, with notes on vocalisations,” BirdingASIA 21 (2014): 76–81.]

“I am a bit less sanguine on finding means (other than by call frequency or song) to separate all birds. Even in the hand, it is by no means clear. We can pick out long-winged male Sakhalin, and short-winged female Pale-legged. But there is more overlap than previously realized, and most are in between. There don’t appear to be any 100% consistent wing-formula differences, and plumage and bare-part features, while somewhat indicative, are again less than 100% reliable—especially under field conditions. But probably we are missing something. The next thing to do is to apply PCA or some other multivariate analysis to figure out reliable means of separation of birds in the hand from our large sample, and also to use the information we have to figure out differences in the timing of passage of the two spp.”

Alström, P. (2012). Identification of Phylloscopus & Seicercus Warblers in China. Notes from presentation given to Beijing Birdwatching Society in November 2012. PDF downloadable here (13 MB). Click here for a 5 MB zip archive containing all 40 pages of the report in JPEG form. Those pages can be synced to your smartphone like photographs and consulted in the field. (Accessed: 28 Nov 2022)