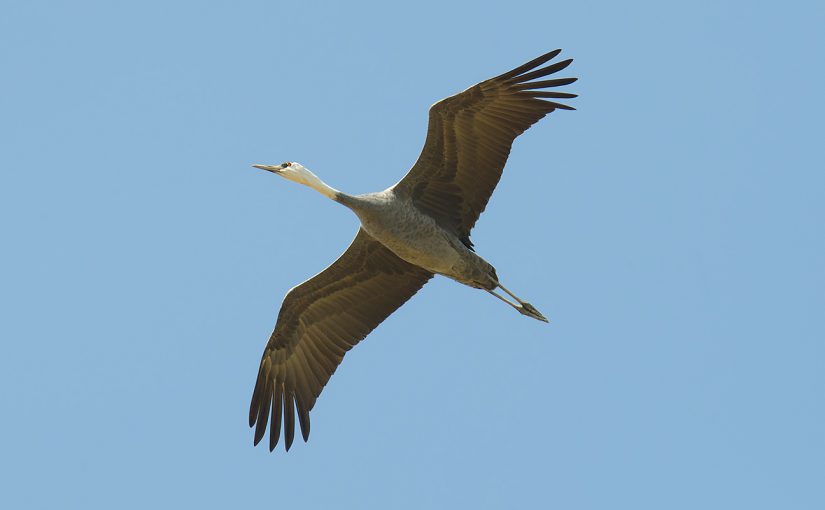 Editor’s note: The photo above shows Hooded Crane flying above fields at Cape Nanhui on 12 Nov. Before our sighting, Grus monacha had never been recorded on the Shanghai Peninsula. Each year, about 100 Hooded Crane overwinter on eastern Chongming Island, 60 km north of Cape Nanhui at the mouth of the Yangtze River.

Elaine Du and I birded three of the four days between Sat. 12 Nov. and Tues. 15 Nov. We noted 105 species. On Saturday we had the first-ever record in Nanhui of Hooded Crane. We also found Baikal Teal on Saturday as well as Greater White-fronted Goose, Tundra Swan, and Jack Snipe. Sunday was also spent at the coastal site in Pudong and gave us calling Brown-cheeked Rail as well as Hair-crested Drongo and late Rufous-tailed Robin. Other weekend Nanhui records were endangered Black-faced Spoonbill holding steady at the defunct nature reserve (30.920500, 121.973167), Amur Falcon feasting on gnats small enough for leaf warblers, an uncommon Shanghai record of Water Pipit, and two more sightings of endangered Yellow-breasted Bunting at its increasingly reliable site (30.850707, 121.863662). On Tuesday at Shanghai’s Zhongshan Park (31.221888, 121.420066) we had a very late Narcissus Flycatcher.

The flyby sighting of Hooded Crane was Elaine’s finest hour. Michael Grunwell was in the back seat and, blinded by the roof, would have never seen the crane. I was busy driving along a very uncertain dirt track. We see so many Grey Heron at Nanhui, and it is so easy to disregard them, and sure enough two of the three birds flying together were Grey Heron. But one was not, and Elaine caught it.

The experience with Jack Snipe occurred Saturday near dark at Iron Track (31.003613, 121.907883). Our partner Michael Grunwell, Elaine, and I were looking for Brown-cheeked Rail. The snipe sneezed when flushed, flew to a towering height in a tighter formation than is typical in Common Snipe, and after all the fuss ended up landing only 150 m from where they had started.

When the snipe began their flight, I figured they were Common and continued looking for rails. Then I heard Michael cry out, “Possible Jack!” The snipe flew directly over us. The bill was noticeably shorter than the bill of the Common I have come to know. Elaine too saw the short bill.

The three of us feel confident in our record of Jack Snipe and urge others to be on the lookout for this species. Get pictures if you can.

The beds are on either side of the river, are unlikely to be developed, and are in good condition. They are a remnant of the habitat that used to cover the entire area.

On Sunday at Nanhui we positively identified 2 Brown-cheeked Rail on call. Here is the recording I made (00:28; 2.7 MB):

The pitch matches closely the pitch in the recordings by Anon Torimi of rails assigned to Rallus indicus. I downloaded Torimi’s recordings from xeno-canto.org. I invite Shanghai birders to do the same. Get to know the sounds of both R. indicus and the extralimital R. aquaticus and start adding these species to your own Shanghai lists.

On Saturday we were amazed to see Amur Falcon catching flies with their talons. We had five near Big Bend (31.000321, 121.938074). In top left of the three-panel photo above, the falcon has spotted its prey and is accelerating toward it. In bottom left, the gnat is visible as the falcon zeroes in. At right, the falcon raises its talons for its tiny prey.

The instinct to use its talons is inefficient in this case and shows that Amur Falcon has evolved to hunt larger game. Smaller aerialists such as swifts, nightjars, swallows, and flycatchers snatch up their prey directly with the mouth.

A NOTE FROM TOMMY PEDERSEN

Tommy Pedersen is a pilot with Emirates. He is Norwegian and has been based in Dubai for many years. An accomplished birder, Tommy created uaebirding.com. This outstanding site is the best introduction to birding in the United Arab Emirates and the Arabian Peninsula.

I had a work flight to Shanghai 9-11 November 2016, and following Craig’s excellent site, I decided to visit Nanhui.

On Day 1, 9 November, I was extremely lucky and bumped into Craig and Elaine with Erica, who took me to the nature reserve. We had a jolly good time (at least I was), and Saunders’s Gulls were soon spotted (http://ebird.org/ebird/view/checklist/S32503941).

Day 2 saw me walking 16 km in total, enjoying a near windless morning with massive migration overhead. It was magic: http://ebird.org/ebird/view/checklist/S32503940

Hope to be back soon